The economic outlook for 2020 is shaped by the COVID-19 pandemic. The first case in Sweden was diagnosed in late January, but the wide-ranging outbreak started in early March. Daily figures showed a sideward trend for some time and finally peaked in mid-June (status: 02.08.2020). 81,012 cases were reported, representing 0.8% of the population. This is by far the highest infection rate in Northern Europe. 5744 deaths were recorded. The Swedish COVID-19 restrictions, the softest in Europe and mainly based on voluntary social distancing, were the reason behind this contagion dynamic. Gatherings were restricted up to 50 people, higher secondary schools and universities were closed. However, schools for younger children, as well as shops, restaurants, factories and contact-services (like hairdressers) remained open. Sweden closed its borders for non-EU citizens in mid-March and opened them again (in cooperation with the EU) for several countries in mid-June.


This different approach to the Covid-19 crisis helped the economy in the short-term. Contrasting with other European countries, the Swedish economy did not enter into recession in the first quarter of 2020 (GDP Q1 2020: +0.1% QOQ), on the back of very strong exports and a high increase in inventories. However, despite voluntary restrictions, household consumption, especially service-consumption, decreased significantly in March and April. In addition, private investments dropped sharply, as the industry had to struggle with lower domestic and external demand in April and May 2020. Exports, which represent 48% of GDP in Sweden, have been on a downward trend since February 2020. This combination resulted in a delayed recession, with an expected single strong downfall of the economy in Q2. Starting from the second half of 2020, the Swedish economy should initiate a gradual recovery. Nevertheless, the recession in the year 2020 will still be the strongest one in post-World War II and the effects of this downturn will be felt for long. Since March, almost 200,000 people have registered as unemployed, increasing the unemployment rate from 7.1% in February to 9.3% in June (the highest level since the beginning of the time-series in 2001). Furthermore, companies have applied for short-term work schemes for around 600,000 employees (11% of the labour force).

The economic downturn was cushioned by several fiscal measures. Discretional fiscal easing amounts to 4.8% of GDP. Additional liquidity measures could increase total fiscal policy support up to 16.6% of GDP. These measures include wage subsidies for short-term leave and higher unemployment benefits, loans to SMEs, temporary grants to businesses to cover their fixed costs, deferrals of tax payments and credit guaranties for Swedish airlines. The Riksbank initiated a programme for corporate loans via monetary policy counterparties, with a scope up to SEK 500 billion (10% of GDP). The interest rate for these loans was cut from 0.2 pp. to 0.1 pp. above the repo rate (which remained at 0%). The Riksbank’s asset purchase programme was extended from SEK 130 billion until the end of 2020 to SEK 500 billion until the end of 2021. In addition, the interest rate for the standing loan facility was cut twice by 0.65 pp. down to 0.1pp. above the repo rate.

The country’s external position will remain positive, as exports have been surprisingly strong in June thanks to a revitalization of economic activity in Scandinavia and Germany, the main export destinations. Nevertheless, the lack of tourism will weigh on the current account, as some neighbouring countries kept their borders closed to Sweden for longer, because of the high number of Covid-19 cases in the country. Conversely, the general government budget should shift from a surplus to a high deficit in 2020. Nevertheless, the increased public debt will stay at a moderate level and remain sustainable.

After the election in September 2018, none of the traditional alliances secured a majority. In the end, Prime Minister Stefan Löfven from the Social Democratic Party (100 seats) could continue his governmental work with the Green party (16 seats), after he stroke a “confidence and supply agreement” with the social-liberal Centre Party (31 seats) and the Liberals (20 seats). This new alliance seems quite stable. Even with a lot of international critique towards Sweden’s lash Covid-19 restrictions, the support for Löfven’s party in the polls benefited from his crisis management. It went up from around 23% in March to 31% in June/July, while the national-populist party “Sweden Democrats” was the main loser of this development (26% in February to 19% in July). The current government is expected to pursue its work until the next regular general election in 2022.

Bills of exchange and promissory notes are neither widely used nor recommended as they must meet a number of formal requirements in order to be considered as legally valid.

Just as the rules for issuing cheques have become more flexible, the sanctions for issuers of uncovered cheques have been relaxed over the years. The use of cheques has subsequently become almost non-existent.

Conversely, use of the SWIFT electronic network by Swedish banks provides a secure, efficient, and cost-effective domestic and international fund-transfer service. Payments are dependent on the buyer’s good faith. Sellers are advised to ensure that their bank account details are correct if they wish to receive timely payment.

Direct debits represent about 10% of non-cash payments in Sweden and are quickly growing in popularity. There are two types of direct debit in Sweden: Autogiro Foretag (AGF) for B2B transactions and Autogiro Privat (AGP) for B2C payments. They can both be used for single or recurring payments.

Amicable settlement aims to recover the debt without transferring the case into a trial procedure. The debtor is informed (either orally or via writing, with written correspondence being preferred) about the debt, the payment deadline, and the consequences of not paying the debt. If debtor agrees to pay the debt, both parties may settle on instalment payments through an official document that sets out the contractual terms of the agreement.

When there is no specific interest clause in the contract, the rate of interest applicable since 2002 is the six-monthly benchmark rate (referensräntan) of the Central Bank of Sweden (Sveriges Riksbank), plus eight percentage points.

Under the Swedish Interest Act (räntelag, 1975, last amended in 2013), interest on damages is awarded from the 30th day following the day on which the creditor addressed a written claim for damages to the defendant, if the plaintiff so requests. In any event, interest may be awarded from the date of service of the summons application.

Where claims meet some basic requirements (e.g. payment is overdue, mediation was attempted), creditors can obtain an injunction to pay (Betalningsföreläggande) via summary proceedings through the Enforcement Service. The application has to be made in writing and clearly express the grounds of the claim. No further proof needs to be submitted.

This Enforcement Authority (Kronofog–demyndigheten) orders the debtor to respond within a period of ten days to two weeks. If the debtor fails to reply in time or acknowledge the debt, a verdict will be rendered on the merits of the original application.

While formal, this system offers a relatively straightforward and quick remedy in respect of undisputed claims, which has greatly freed up the courts. Creditors are not required to hire a lawyer but, in some circumstances, would be well advised to do so. On average, the process takes two months from application to decision. The decision is immediately enforceable.

If the debtor contests the debt, the creditor has the decision of either turning to the District Court (the first instance, Tingsrätten) or to terminate the process.

Proceedings involve a preliminary hearing in which the judge attempts to help the parties reach a settlement after examining their case documents, evidence and arguments. It is up to the parties themselves to decide what evidence they wish to submit.

If the dispute remains unresolved, the proceedings continue with written submissions and oral arguments until the main hearing, where the emphasis is on counsels’ pleadings (defence and prosecution) and examination of witnesses’ testimonies.

In accordance with the principle of immediateness, the court bases its decision exclusively on the evidence presented at the trial. Barring exceptional circumstances, the judgement is customarily issued within two weeks thereafter.

As a general rule, the Code of Civil Procedure requires the losing party to bear all legal costs considered reasonable, as well as the attorney fees incurred by the winning party beyond a given threshold claim amount (about SEK 22,250, approximately €2,162).

It takes up to twelve months (in exceptional cases more) to obtain a writ of execution in first instance, bearing in mind that there is a widespread tendency in Sweden to appeal against judgements.

Enforcement of a Legal Decision

As soon as a domestic judgment becomes final, it is enforceable. If the debtor does not comply, the creditor can request the court’s enforcement authority to seize and sell the debtor’s assets.

For awards rendered in an EU member-state, special enforcement conditions are provided. When the claim is undisputed, the creditor may apply to the European Enforcement Order, or when the claim does not exceed €2,000, the creditor may start a European Small Claim Procedure. For awards issued in non-EU countries, the Svea Hovrät Court of Appeal must recognize an award in order to enforce it, provided that a recognition and enforcement agreement has been signed between the non-EU country and Sweden.

Swedish law does not formally regulate out-of court arrangements. Nevertheless, creditors and debtors can enter into voluntary negotiations in order to negotiate the debt and reach an agreement.

The aim of restructuring is to find a financial solution for an insolvent company that is deemed to have sustainable long-term business prospects. It can apply for a restructuring with the local court. If approved, the court will appoint a rekonstruktör to manage the restructuring. The latter will investigate the financial situation of the company, before establishing and implementing a restructuring plan under which up to 75% of the debt may be written off.

Bankruptcy proceedings are initiated as a consequence of a company becoming permanently insolvent. They aim to wind down an insolvent company by selling its assets and distributing any income to creditors. Either the debtor or the creditor can file a petition before the local court. After the court has declared a company bankrupt, it appoints an administrator that independently takes control over the company’s assets with the main task of realising such assets and repaying the debts of the bankruptcy estate in accordance with the creditors’ statutory ranking. 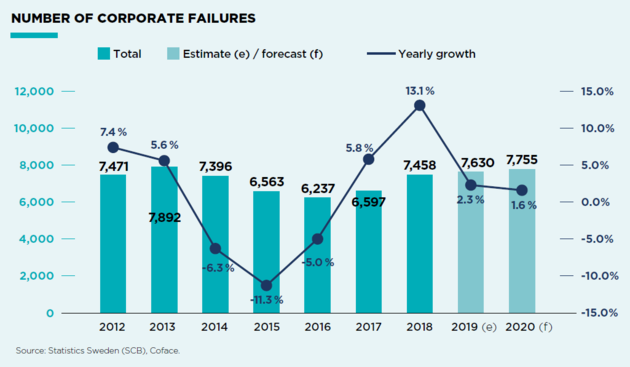