-     Net loss ratio at 48.5% in Q3-2018 (44.4% at constant exchange rates), thanks to controlled risk monitoring and favourable development of previous claims

-     Net combined ratio of 82.8% in Q3-2018, reflecting progressive normalisation of the risk environment in the third quarter

-     €30m share buyback programme completed. The repurchased shares will be cancelled in accordance with the decision of the Board of Directors on 24 October 2018

-     Announcement of a strategic partnership with Tradeshift

Unless otherwise indicated, the changes are expressed in comparison with the results as at 30 September 2017.

“More than everCoface believes Fit to Win is the right strategy and continues to implement the plan with determination. Our ambition to become the most agile global credit insurer is particularly fitting in the current risk environment, which continuous to normalise progressively. Political uncertainty, mainly in Europe; indisputable pressures on the distribution sector; and the challenge to free trade are growing, increasing the level of risk in the economy.

The results of the first nine months of the year confirm Coface’s ability to execute, with a net income of €98.2m and a RoATE of 8.2%.

Confident in the strength of our balance sheet and in line with the second pillar of Fit to Win, Coface will launch an additional share buyback for a target amount of €15m. This programme does not affect Coface's ability to finance its growth, be it organic or external, as shown by the proposed acquisition of PKZ. Finally, the strategic agreement with Tradeshift shows our ability to work with leaders in the digitalrevolution.”

The Board of Directors of COFACE SA examined the consolidated financial statements at 30 September 2018 at its meeting of 24 October 2018.

They were also previously reviewed by the Audit Committee at its meeting on 23 October 2018. 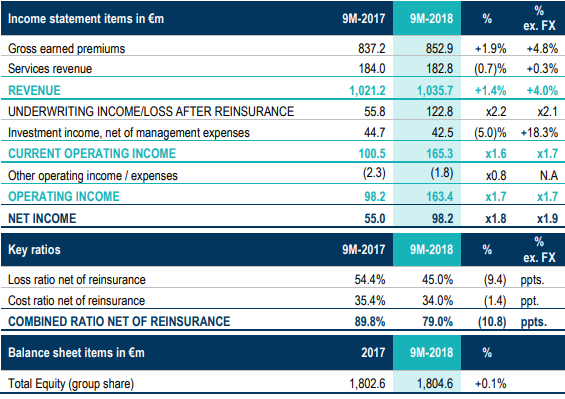 Coface recorded consolidated turnover of €1,035.7m for the first nine months of the year, up 4.0% at constant exchange rates compared to 30 September 2017. On a reported basis (at current exchange rates), revenue increased by +1.4% due to the strengthening of the euro against the other currencies in which the Group operates.

In line with the trends of previous quarters, the growth in Coface's customer business had a positive impact of +4.8% over the first nine months of the year. The price decline remains controlled at (1.4)%, reflecting good commercial control and the start of re-pricing in the riskiest markets.

The retention rate is high in most regions and reached a record level of 92.1% for the Group. New business totalled €88m, down €14m from 9M-2017, in line with a controlled underwriting policy. The third quarter is still in decline compared to the previous year, but at a slower rate than that seen in the first half.

Insurance revenues (including Bonding and Single Risk) grew by +4.8% at constant scope and exchange rates compared to 9M-2017 (up +1.9% at current exchange rates), thanks to the return to growth in mature markets on the back of growth in our clients' business and a high level of contract retention. In emerging markets, contract portfolios stabilised.

Revenues from other activities (Factoring and Services) were down (3.9)% vs. 9M-2017 due to lower factoring revenues in Germany in a context of margin control, offset by good growth in service revenues.

In the Northern Europe region, revenue decreased by (0.6)% (on a current basis and at constant exchange rates), mainly due to lower factoring revenues. Credit insurance revenues increased by +1.9% due to the impact of policyholder activity and a good level of retention.

In Western Europe, revenue increased by +0.8% and by +1.5% at constant exchange rates thanks, on the one hand, to the activity of our customers and, on the other hand, to record retention for the Group.

In Central and Eastern Europe, revenue grew by +7.5% and by +8.7% at constant exchange rates. All countries in the region contributed to this performance, which benefited from the growth in our customers’ revenues and record retention. Factoring revenues were also up in Poland.

In the Mediterranean and Africa region, driven by Italy and Spain, turnover rose by +6.6% and +8.3% at constant exchange rates, thanks to good sales momentum and growth in policyholders' business.

In North America, revenue increased by +2.1% as reported and by +8.9% at constant exchange rates. The Group has now stabilised its portfolio and the signing of major contracts explains the significant growth in revenue.

In emerging markets, where the risk environment is less favourable, the growth rate is lower. Turnover in the Asia-Pacific region decreased by (5.3)% on a current basis and increased slightly by +0.8% at constant exchange rates. Customer activity is increasing and the region has recorded a strong improvement in its sales performance. However, these positive trends are offset by high premium refunds (low claims experience) and low Single Risk sales.

In Latin America, revenue decreased by (13.8)% on a current basis and was almost stable at +0.4% at constant exchange rates due to the recording of premium rebates. This decrease comes against a backdrop of prudent risk management (currency turbulence).

The gross reinsurance loss ratio stood at 43.8% for the first nine months of 2018, an improvement of 8.0 points compared to the previous year. In Q3-2018, the gross loss ratio was slightly higher than in the previous quarter (46.5% in Q3-2018 vs. 45.0% in Q2-2018), mainly due to an unfavourable exchange rate effect (revaluation of liabilities in local currencies), a phenomenon more than offset by a gain recorded in financial income. Excluding this effect, the gross loss ratio would have been 43.6% for the quarter.

The Group's provisioning policy remains unchanged. The rigorous management of past claims enabled the Group to record 33.2 points of recoveries over prior years. These levels remain well above the historical average. They are supported in particular by good recoveries on two major claims recorded in previous years. A portion of these recoveries has been provisioned again in the current year because the companies concerned, to which the Group retains exposure, have not fully recovered from their difficulties.

These movements are an opportunity for the Group to reiterate that credit insurance activity is sensitive to large single claims, which can frequently represent a significant portion of quarterly profit.

Coface is continuing to drive its operational efficiency programme. Since the beginning of the year Coface has achieved €27m cost savings; its annualised total cost savings objective of €30m for 2018 will be exceeded.

The cost ratio net of reinsurance stood at 34.0% for the first nine months, an improvement of 1.4 points year-on-year.

Net financial income amounted to €42.5m over nine months, including €6.4m in net realised capital gains. The high volatility of exchange rates in a number of emerging countries during Q3-2018 resulted in an exchange gain of €18m in Q3-2018 (and €9.5m over nine months). This apparently very high gain is in fact offset by a €10m charge to the technical account (loss ratio) and a €2m decrease in the Group's equity. Overall, since the beginning of the year, the strong exchange rate movements have therefore had only a very marginal impact (around €1m) on the company's financial position, in line with the Group's matching rules and hedging policy.

Operating income amounted to €163.4m since the beginning of the year, up sharply (+66.4%) compared to the previous year, following the decline in the loss ratio.

This change is mainly due to positive net income of €98.2m offset by the dividend payment (€52.9m), share buybacks (€30.1m) and negative adjustments to the fair value of investments (€10.0m).

The annualised return on average tangible equity (RoATE) was 8.2% at 30 September 2018, driven by the improvement in the technical result.

The third quarter of 2018 confirms Coface's scenario of a progressive normalisation of the risk environment under the combined effect of high political uncertainty (particularly in Europe), structural pressures on the distribution sector and continued challenges to free trade.

In this economical context, Coface is confident in the pertinence of its strategy to become the most agile credit insurer and remains focused on its execution.

Supported by its investments in risk management, Coface continues its disciplined underwriting policy, while reiterating that its credit insurance activity is sensitive to large claims, which can represent a significant portion of quarterly profit.

The rigorous management of the various transformation projects over 2018 will make it possible to limit the total cost of investments recorded over the year to below the €19m expected previously. The resources thus saved would be used in 2019, which will be another year of investment. In particular, Coface is preparing for the implementation of some structural new accounting standards. In addition, we will exceed the €30m cost savings target.

The agreement to acquire PKZ and the strategic partnership with Tradeshift confirm Coface’s ability to grow and to innovate, in line with its selective growth strategy.

In parallel, Coface is continuing work on its partial internal model (Solvency II) and continues to monitor potential regulatory changes that could increase the capital requirement under the standard formula.

The share buyback programme for a maximum amount of €30m announced on February 12, 2018 has been completed and the Board of Directors has approved the cancellation of the 3,348,971 shares purchased.

Confident in the company’s balance sheet strength, the Board of Directors also approved the launch of an additional share buyback for a maximum amount of €15 m. This new programme will run until February, 2019.

Finally, the objectives of delivering a net combined ratio of around 83% over the cycle and achieving a RoATE of 8% + 1% are maintained.