Company insolvencies in Western Europe: a drop of 7% expected in 2015 but situation is contrasted

Company insolvencies in Western Europe have experienced two successive storms. The subprime crisis, which made insolvencies jump by an average of +11% in the twelve countries studied was, unsurprisingly, followed by further shock waves, with increases of +8% in 2012 and +5% in 2013. Today the skies have begun to clear. The average drop of 9% observed in 2014 will continue with -7% in 2015 . While insolvencies continue to increase in Italy and Norway, they are seeing the positive impact of the timid recovery in the eurozone in ten other countries (Germany, Belgium, Denmark, Finland, France, the Netherlands, Portugal, United Kingdom and Sweden).

Contrasting decreases depending on the country

Although there is a marked improvement in 10 of the 12 countries studied (with the exception of Norway and Italy), the dynamics differ across countries and current insolvency levels are not yet comparable to pre-crisis levels. Indeed, most countries have not yet returned to their 2008 levels. This is all the more noticeable in the southern European countries of 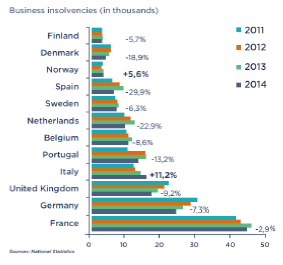 Italy, Portugal and Spain, where the continuing high levels of unemployment are dampening growth potential.

The zone’s importing countries have also benefited from the depreciation of the euro and the fall in oil prices. However, a close watch should be kept on risks linked to slower growth in emerging countries.

Another fly in the ointment is the low level of investment in the eurozone. In this area too, pre-crisis levels have not been reached (19.5% of GDP in 2014 against 23% in 2007). Despite more favourable financing conditions related to the fall in interest rates, investment has not really kicked off again. Poor dynamism in relation to anticipated demand is discouraging business investment. As the rate of use of businesses’ capacities fell due to the crisis, this is also delaying productive investment. However, there has been a modest recovery since the beginning of the year, thanks to private consumption and an improved business climate.

For 2015, the business failure forecasting model developed by Coface economists predicts a further decrease, on average of around 7%, for the twelve Western European countries in the sample. 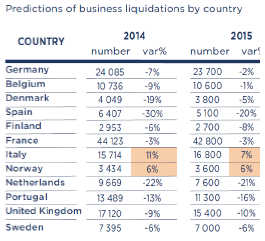 This model includes such variables as business climate, investment and the number of building permits issued.

The conditions for growth resuming in the eurozone will be particularly favourable for the Netherlands, Spain and Portugal. The expected drops will be less marked in Germany (-2%) and in France (-3%).

Italy and Norway, the two countries still in the red in 2014, will remain there in 2015. Business liquidations will continue to increase,

for different reasons. In Italy (where they areSource : Coface estimated to increase by +7% in 2015, following +11% in 2014), the insolvency risk is accentuated by the omnipresence of small businesses, less secure than other categories, as well as a slight recovery. In Norway, the world’s seventh largest oil exporter, the increase in insolvencies (+6% in 2014 and 2015) is in line with the fall in oil prices. 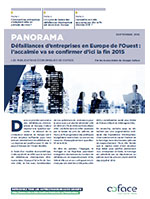 
Company insolvencies in Western Europe: slight lull being confirmed for 2015

Infographics: Insolvencies in Western Europe: A downward cycle has started