Political problems have emerged (Brexit), just as the European economy is staging a recovery.

The uptick in household consumption reflects restored confidence among households and companies in Western Europe. This positive dynamic has led to the ICT1 and automotive sectors being reclassified as low risk (in Western, as well as Central and Eastern Europe). The rise in new vehicle registrations is benefiting auto manufacturers and companies in the metallurgy sector. Although metallurgy is still associated with high risk, its assessment has been upgraded (the automotive industry accounts for 12% of the sector and construction for 50%). The moderate improvement observed at the beginning of the year in the construction sector has been confirmed. This, along with the rise in building permits in the region (35% in Spain, 12.5% in Germany, 7.6% in France year-on-year average in March), has led to the sector being reclassified as average risk.
Despite the positive trend in household spending, the textile sector has been weighed down by heightened internal competition. The industry’s mid-range segment is under pressure from major European groups.
Although the region is gaining momentum, three sectors are under surveillance in the UK following the anticipated split with the European Union. In the short term, construction (6.1% of GDP) will be weighed down by rising import prices, due to the depreciation of the pound sterling. The pharmaceutical and automotive sectors may be negatively impacted by entry barriers, as goods from these industries are among the most heavily exported (7.8% and 11.3% of exports respectively).

A shift between emerging and developed markets

Latin America is still associated with the highest risk in the world, with its energy, steel and construction sectors all classified in the maximum risk category (very high risk). On the positive side, Brazil, like many other Latin American countries, enjoys comparative advantages with its manufacture of paper pulp enhanced by the fall of the real against dollar in 2015 (-47%). During the first five months of 2016, Brazilian exports surged by 10%, reducing risks in the paper & timber sector (reclassified as average risk).
Among the 12 sectors analysed by Coface, the healthcare sector remains the least risky globally. Despite the challenging international environment, the sector is benefiting from increasing healthcare demand in emerging economies and a business model in advanced economies based on reimbursement. This is inciting companies to invest. Given the high level of profitability observed in North America, we are reclassifying the pharmaceutical sector as very low risk. Nevertheless, US growth is losing momentum in 2016 (1.8%) and retail sales are slowing, reflecting more muted consumption. North America’s textile sector, which is being impacted by this slowdown, has been downgraded to high risk.

Even though stronger economic trends can be seen, certain regions include highly distressed sectors.
The Middle East, which is mainly dependent on oil exports, has adopted austerity policies which are detrimental to other sectors. These measures are weighing on economic activities which rely on dynamic household consumption. These developments are the result of lower oil prices, which have led to a decrease in fuel subsidies. The automotive sector, the food industry, retail and textile & clothing, have all subsequently been downgraded to high risk. 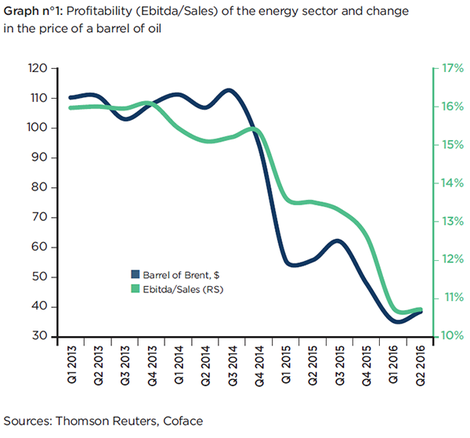 Policies imposing cuts in public expenditure have also impacted emerging Asian countries. This is particularly so in the construction sector, where companies’ debt levels have reached record levels due increased late payments by their clients. The sector has therefore been downgraded to very high risk. However, the agrofood industry is faring better and expanding, thanks to a slight rally in agricultural commodity prices. 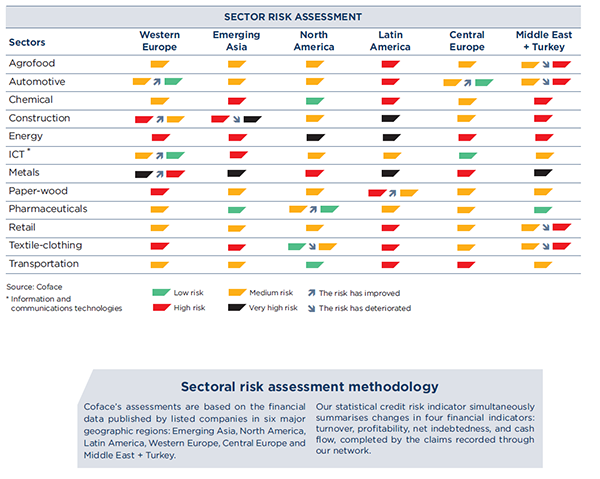 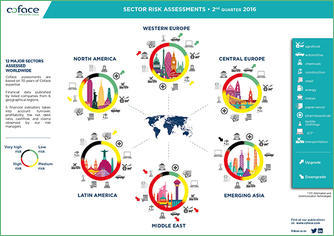