The European Union - Western Balkans Summit will take place in Sofia, Bulgaria, on the 17th of May 2018. This meeting aims to reaffirm the EU’s commitment towards the Western Balkans gaining EU membership.

Coface’s economists see the EU accession as likely to happen, particularly as it would counterbalance Russian and Chinese presence in the region.

Following the disruptions caused by the 1990s wars and the 2008-2011 financial crises, countries in the Western Balkans (Albania, Bosnia and Herzegovina, Kosovo, Macedonia, Montenegro and Serbia) deepened their economic ties with the European Union. The EU is the region’s largest trade partner, accounting for 83% of its exports and 67% of its imports. Since 2008, trade in goods between the EU and the Western Balkans has increased by 80%, boosted by Stabilisation and Association Agreements. The region’s high trade deficit is due to its narrow productive base, with low added-value goods. It is mainly financed by remittances made by its emigrants (almost a quarter of the population lives abroad) and foreign direct investments, mostly from Western Europe. Emigrant remittances represent around 10% of GDP for Albania, Bosnia and Herzegovina, Montenegro and Serbia, approximately 15% for Kosovo, but only 4% for Macedonia. The European presence is particularly important in banking, telecommunications, energy, tourism and, to a lesser extent, manufacturing. The stock of foreign direct investment accounts for 40% of GDP in Albania, Bosnia and Macedonia, 70% in Serbia and 113% in Macedonia. The strong usage of the euro in the region means that they have a high dependence on the Eurozone’s economic cycle and its monetary policies.

Corruption, high unemployment and low GDP per capita, all point to a long road ahead

Due to the region’s strategic geographic position and the European Union’s concerns on preventing the spill-over of conflicts between neighbouring countries and on counterbalancing the influence of Russia and the China, accession to EU membership is likely to be completed. This is expected to begin with two most advanced candidates, Serbia and Montenegro, probably before 2025. Membership would entail limited additional financial costs for the European Union. European financial assistance amounts to approximately 7 billion euros for the 2014-2020 period (most of which concerns supporting administrative and institutional reforms) and, once membership is processed, it is estimated that this could be completed by extra funds in the order of around 2% of the EU-28 2017 budget.

Nevertheless, due to a number of serious governance deficiencies, the region’s accession to EU membership will be a long process. Corruption is a major problem in the region’s public and legal sectors and the Western Balkans has subsequently been placed at the bottom of the Transparency International 2017 ranking in Europe. This situation is corroborated by World Bank governance indicators, which highlight poor political stability in Albania, Macedonia, Kosovo and Montenegro, institutional fragmentation in Bosnia and Herzegovina, and weak bankruptcy and insolvency regimes.

The average GDP per capita[1] in the Western Balkans barely reaches a quarter of that of the EU-15 and is around half of the level of the 11 Eastern European EU members. Convergence, which was well underway in the years following the wars, suddenly stopped during the financial crisis, due to a lack of competitiveness. Unemployment stands at 16.2% of the total working population and at 37.6% among the younger working age population. Taking into account current GDP growth rates (of just over 3% on average), the World Bank estimates that it would take about six decades for average GDP per capita in the Western Balkans to reach the EU average. 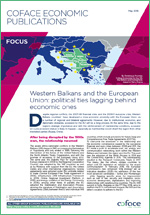