With the new Suez Canal,confidence seems to be returning to Egypt, marking the beginning of a new era for the country. In effect, Egypt’s economy is trying to get back on track following the effects of six different governments since 2011. Authorities recently announced that the real growth rate stood at 4.1% in 2014/2015, compared to 2.2 % in 2013/2014 (the fiscal year running from July to June). Coface estimates that growth will increase to 4.4% for 2015/2016. The government’s commitment to structural reforms aims to boost Egypt’s potential growth rate to approach 6% in the upcoming period, within a context of improved business confidence, higher investments and greater productivity. Improved economic performance and political stability have renewed Egypt’s attraction for investors. The government secured investments totaling 36 billion USD and external financing worth 24 billion USD, during an economic development conference held in March 2015.

The first section of this panorama will explore the nature of the macroeconomici mprovements and what the country can expect over the following years. The recovery in the manufacturing sector, relative political stability and the authorities’ willingness to implement economic reforms are all driving the current economic growth. Since President Abdel Fattah al-Sisi took office last year, state finances have strengthened on the back of reforms, which have included cutting energy subsidies (helped by the context of lower oil prices) and the introduction of new taxes. The government has forged international alliances to obtain aid and investments.

Nevertheless, the country still faces big challenges as will be seen in the second part of this panorama. Egypt’s current account balance fell into deficit in 2015, as official transfers dropped and imports edged up. Financing needs therefore remain significant in the medium term and dependent on donations and FDI from Gulf countries. Fiscal reforms are a key issue, as public deficit and public debt remain high. The country’s lack of competitiveness is another structural weakness in the economy. Finally, regional security issues still represent a source of risk for economic stability.
The final section focuses on Egypt’s tourism and automotive sectors. International tourists are returning to Egypt as the political scene stabilizes. The government’s efforts to attract more tourists have started to bear fruit. Egypt also possesses one of region’s few automotive production bases, with some of the major global players present. The country’s strategic geographic location, its growth potential, perspectives for new infrastructure investments and higher political stability are its main assets for attracting investments. 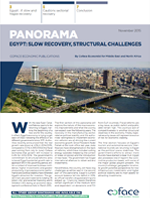