The number of company insolvencies over the past 12 months stood at 63,002 companies at the end of October. Coface registered a 0.9% fall over the year. The month of October, historically a disaster-stricken month, has not registered such a low level of insolvencies since 2010. The resistance of household consumption and the restructuring of certain sectors buoy this slight upturn - within a still fragile context. However, we note a certain change in the type of defaulting companies. A further reduction in the number of French insolvencies in 2015 is expected, but only a modest one.

The lowest level of company insolvencies registered since August 2013

This slight drop has been due to several factors. Private consumption has resisted over the past months and despite a continuous increase in unemployment, it rose 0.6% in Q3 2014 year-on-year. The granting of credit to non-financial companies has also slightly accelerated (+0.8% annual rate at the end of October), and the volume of exports of goods and services has stabilised (+2% in Q3).

The weakness in company start-ups registered until the end of 2012 has also contributed to limiting the number of possible insolvencies (we consider that the risk of a company defaulting is higher between one and three years of existence). Lastly, certain sectors have been restructured, particularly through ongoing consolidations, which limit the number of fragile companies. This is the case for the automotive and transport sectors.

Disparities between sectors but a trend towards fragility

Company insolvencies in the construction sector fell by 0.8% (at the end of October 2014). However, this improvement hides the massive increase in related costs (accumulation of trade payables of defaulting companies) of 51%. The sector is suffering from a reduction in household expenditure for "secondary" work and over-cautiousness in investment.

The food-processing sector has registered a worrying rise in insolvencies.

"Increased competition between distributors has caused them to reduce prices. Producers must therefore reduce their margins to survive and it is the companies upstream in the value chain that suffer the most", comments Guillaume Baqué, Coface economist."Thus, insolvencies in the food-processing sector rose by 2.7% in October over one year."

The over-cautiousness in household expenditure affects the state of health of companies serving individuals. Insolvencies in the sector increased by 1.1% at the end of October 2014. Conversely, the chemical sector has benefited from the fall in the price of oil over the past few months, with the highest registered fall (-9.2%).

"The economic and financial crises reveal the vulnerabilities of mature companies”,explains Guillaume Baqué.“For older companies, a normal cruising speed of growth in the economy can result in some of them living on past dominance. Within this context, such companies are not inclined to innovate, develop their business or reduce the concentration of their customer portfolio. Due to this, they are then very fragile during a crisis."

Furthermore, even though micro-enterprises represent over 92% of the company insolvencies registered, intermediate and large companies have also been very affected.

"Over last two months, 28 of the defaulting intermediate and large size companies are among the 100 largest insolvencies of 2014 - compared to the 12 observed over the same period in 2013", specifies Guillaume Baqué. 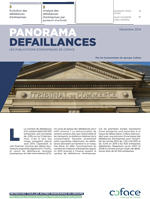