With Greece about to pull out of its third bailout package, signs of economic recovery are multiplying: 2017 was a year marked by the return of positive growth (+1.4%), and - despite weakening growth in the eurozone - Greek GDP growth is expected to be close to 2% in 2018, with Greek households and businesses remaining more optimistic in the first half of the year than in 2017.

The recent improvement in the economic momentum is far from removing the stigmata of the crisis: from 2008 to 2015, GDP and investment fell respectively by 25% and 60%, the unemployment rate reached 28%, and business turnover collapsed by a third. Wages and property prices halved. Greek banks – despite their recapitalization in 2015 – are still recording high rates of non-performing loans. The International Monetary Fund (IMF) and the European Commission estimate that it will take 10 years before the economy returns to its pre-crisis level.

However, reforms undertaken since 2008 have led to a consolidation of the public accounts, which have posted primary surpluses since 2016. The fiscal and current account imbalances that underpinned the crisis have been partly addressed through significant fiscal adjustments and a severe internal devaluation. Fiscal credibility has been reinforced, allowing the country to make its return to international markets and to lift part of the capital controls. Companies have become more competitive and have reduced their debts.

They are now more export-oriented, which has helped new sectors to develop, allowing the productive fabric to evolve. Further confirming these funding changes is the fact that the uncertainties currently hanging over Greek companies are more related to the external environment (slowing growth in the rest of the euro area, multiple political risks) than the domestic one – a first since 2008. 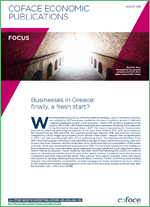