Can China shield its economy from the impact of COVID-19?

Economic activity in China could decelerate faster than expected this year and miss the Communist Party of China’s (CPC) growth target of 5.6%. In recent months, the Chinese economy has faced multiple headwinds, such as the consequences of the trade war with the United States, as well as structural factors, like the country’s demographic situation (15% of the Chinese population is over 65 years old). In this context, the COVID-19 pandemic is an additional shock that will add significantly to existing challenges.

The aforementioned 5.6% growth target is a key threshold for China and the CPC, with the party considering this a "moderately prosperous" level of society. China defines this goal as a doubling of 2010 nominal per capita income figures. Despite the current circumstances, the CPC is hoping to achieve this objective before its 100th anniversary in July 2021.

At this stage, the government appears to remain confident in meeting the requirements for 2020. However, it is more likely that this milestone will have to be postponed until 2021. The spread of COVID-19 across the world, notably to key markets for China such as Europe and North America (30% of its exports), will drag on Chinese economic activity this year.

A surge in corporate insolvencies is expected, despite authorities’ strong measures to limit the shock

Chinese authorities have taken action to compensate the pandemic’s impact on the economy. For example, the People’s Bank of China (PBOC) has, so far, focused on rather prudent and targeted measures such as interest rate cuts. Notwithstanding the added flexibility enabled by these decisions, China will have to resort to aggressive monetary, as well as fiscal easing if it wants to manage the stabilization of its economy.

Unlike 2009, there is less room for maneuver. In particular, foreign exchange reserves are not sufficient to cover outflows, putting downward pressures on the yuan.

On the fiscal front, additional infrastructure investments aimed at offsetting the shock will add to indebtedness at local level, resulting in pressures on the already-stretched banking sector and highly indebted corporations. In this context, an increase in bond defaults and corporate insolvencies, accompanied by restructuring efforts in the banking sector, are to be expected. 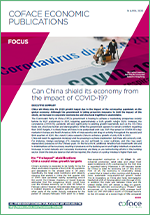 Download this press release : Can China shield its economy from the impact of COVID-19? (151.46 kB)