Political risks in Africa: the temperature is rising

Africa has seen a bevy of political events in recent months. After the deterioration of the security situation in the Sahel, as well as the forced departures of historical leaders from Algeria and Sudan via the streets, where will the political risks manifest in the second half of the year?

Using its quantitative political risk model, created in March 2017, Coface intends to identify – beyond the pace dictated by current events – recent political risk trends and thus the countries to be monitored.

Over the recent decades, regular conflicts of varying intensities and natures have marked Africa, leading notably to a decline in investment and trade flows, delaying the development of some African countries. Recent years have seen a resurgence of conflicts on the continent, mainly as a result of the activities of various Islamist groups, particularly in the Sahel region, mobilizing the armed forces of certain states on the continent and targeting civilian populations. Conflicts of political origin – sometimes mixed with ethnic, religious or even linguistic considerations – also remain present in Africa (Libya, Central African Republic, Democratic Republic of the Congo, Cameroon...).

Our indices of political violence also confi rm that violent events (conflicts and/ or terrorist acts), although more localised, have become relatively common again, particularly in the Sahel, compared to the beginning of the 21st century: compared to 2008, there were almost twice as many conflicts across the continent in 2018.

Moreover, as events in North Africa and the Middle East in 2011 have shown, as mobilisation instruments develop, the exasperation of populations, fuelled by socio-economic pressures exposes some countries to the risk of future instability. Although large-scale conflicts, as in Libya, or regime changes are not a given, a fragile socio-economic context can, in the long term, cause unrest that can generate, at a minimum, uncertainty in the political environment. Our political and social fragility index indicates that 10 countries – Angola, Cameroon, Chad, Djibouti, Egypt, Ethiopia, Mauritania, Mozambique, Uganda and the DRC – could be or continue to be affected in the foreseeable future. The increase in mobilisation instruments is one of the factors behind the increased risk. This dynamic, in force throughout the continent, could potentially lead to a multiplication of destabilizing political events in Africa in the longer-term. 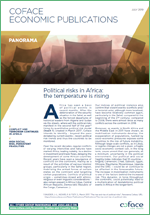 Download this publication : Political risks in Africa: the temperature is rising (1.33 MB)